Analysing the Music of Jennifer Walshe: Part One

As a composer, Jennifer Walshe is ruthless in her experimentation. Her uncompromising determination to explore uncharted territory can sometimes leave listeners more than a little puzzled or even indifferent. But at other times, she can hit upon something so devastatingly original and creative, that it leaves you bubbling and buzzing with excitement. Or stunned to silence. Or moved to stillness. It is the uncertainty of the outcomes of these experiments which is, to me, the very definition of avant-garde. That is we want from our new music. Bold gestures that are unafraid to fail, in the hope of unearthing something astounding.

This is what Jennifer Walshe's music means to me. But it is so deeply bound up with conceptual art and with philosophies which seek to make sense of our modern world, that it can be difficult to analyse her work in musical terms, to try to understand what makes it do what it does. So we ask: How can we analyse Walshe's work from a musicological perspective?

One of the most distinguishing features of Walshe's music is the overlaying of many disparate layers of audio of visual information. The layers include (but are not limited to!) melody, harmony, sonic textures (produced acoustically or electronically), spoken word, physical gestures, and video or other images.

The pitched elements of her work (melody and harmony) are not entirely tonal, but neither are they dissonant. They tend to occupy a middle ground combining close intervals of tones and semitones, with wider, more consonant intervals, with no clear tonal centre. In this way, her pitch material becomes just another sonic layer, which carefully avoids any sense of linear directionality that might draw attention away from the other layers. We are not following the harmonic progression with an expectation of resolution, but rather, we perceive it as an almost static backdrop (indeed, the harmonies very often are static) against which, and in relation to which, other sound events unfold.

A major source of the great richness of the soundworlds Walshe creates in her music is her endlessly imaginative approach to sonic textures. One particularly beautiful example of this is the work He Was She Was, written for CoMA in 2008. The tape part that runs for the duration of this five-minute piece is simply a quiet, delicate crackling sound, seemingly a recording of a fire place. The (unspecified) instruments, when they are not quietly playing one or two long held pitches interspersed with silence, have other actions to perform; the breaking of twigs, breathing into a paper bag, a rushed whispering voice and, at the very end, the striking of matches as two players each speak alternating lines one at a time. All these combine to create a most beautiful mood, as if capturing some transient imaginary scene in the listener's mind.

Another of Walshe's most memorable approaches to sound texture is in the work Scintillia, written under one of her Grúpat alter egos, Detleva Verens. The work, which may be best seen live to appreciate the full effect, is performed by a solo voice in front of two microphones, each one connected to a speaker on opposite sides of the room. The rasping, slurping, agitated breathing of soloist's voice is manipulated by a small container, such as the lid of a shampoo bottle, which can then redirect the breath from one microphone to another, or even divide the breath stream into two, sending the manipulated and unmanipulated sounds to opposite sides of the room simultaneously.

When using the human voice as the source of her sound textures, Walshe's scores always give very clear and imaginative descriptions of the required timbre. The instructions given in the score for Duration and Its Simple Modes, for example, ask the performers to sing like a “tired and emotional sailor singing his heart out” or to sound “louche and grainy, like a drunk Las Vegas nightclub singer – get into character, swaying boozily, it's 3am and you finally have the mic in your hand”. To supplement these instructions, she will also provide a short recording with the score as an aural guide for the performers. The same care is taken when asking vocal performers to sing or speak in different styles, moods or accents, and each different tone of voice will carry a certain meaning for the audience which will impact upon their perception of the work. These references can also very often serve as the main vehicle for the humour that is such an important part of her music as well. The way in which her music touches on such a broad spectrum of cultural reference points is one key part of how Walshe's music situates itself within her audience's everyday soundscape, how it reflects, in such a creative way, the world in which we live.

Her speaking parts in particular add a very personal quality to her music. The vocal parts in her work are often performed by the composer herself, but if we are not hearing her live, then we must imagine her speaking in her strong Irish accent with her distinctly fast-paced delivery. Indeed, to observe Walshe giving a public lecture is to witness an impressively virtuosic spoken performance in itself. So we can appreciate the authenticity and the personal quality of her writing.

Equally important as these sonic layers are the visual components of her work. Just as her vocal writing touches on a diverse cross section of cultural reference points, so too do the video parts in her work cut together a broad range of source material from popular culture, wildlife footage, everyday street scenes from today and yesteryear, and other homemade clips.

Written texts may also be presented to the audience as another visual component, either overlaid on top of the video images, as in Dordán, or simply printed on large cards held up by the performer, as in Duration and Its Simple Modes (see analysis below).

But perhaps the most interesting of the visual dimensions in her work is the physicality and theatricality she requires of the performers. These details are conveyed to the performers either through written instructions or photographs provided in the score, or in accompanying video clips (See Figure 1). Facial expressions, body positions, and carefully choreographed movements all dramatically heighten the audience's experience of the performance.

With so many layers of sound and vision, engaging our senses and our imaginations, the specific details of each individual part can easily become subsumed into the many-layered whole. The buzz of activity this creates is part of the excitement of her music, and the structure that emerges from the chaos is a key factor in the effect the music will have on the listener. For these reasons, understanding what is happening in each individual layer is not quite as important as how these layers combine to create the whole.

Figure 1: Tableaux from the score for Duration and Its Simple Modes showing the positions for four sopranos and two altos, based on Hogarth's The Rake's Progress: 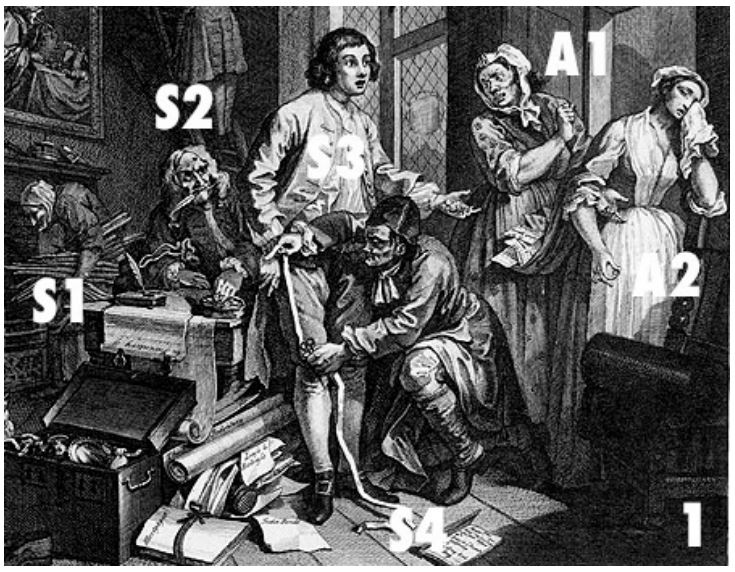 So if each individual layer is not the source of the overall effect of Walshe's music, then how can we analyse her work. There are really just two perspectives we will draw on here. One of these is to analyse the structure of the work, which we will do next week, in the second installment of this article. The other is to look at how the many layers of activity come together to function as a whole.

Or perhaps it would be more accurate to say, how they don't come together, because the particular character of Walshe's music comes from the very effect of perceiving so many layers of information simultaneously. The different strands of the work aren't intended to blend together in an analogous way to how the layers of an instrumental ensemble will blend together. This isn't orchestration in anything like the usual sense; the spoken word parts aren't couched neatly inside the vocal harmonies; the visuals don't move in sync with the melody; disparate strands don't come together to form a single composite voice. Each layer maintains its individual character throughout. We can follow each thread separately — the spoken narrative, the sequence of physical movement, the harmonic progression — but it is only through their juxtaposition that they form a very particular kind of perceived whole.

This is not a postmodern juxtaposition of disparate elements. Nor is it a well-worn commentary on the relationship between 'high' and 'low' art forms. In those older compositional languages, the juxtapositions seek to draw attention to themselves. The obvious clashes of cultures and styles are an end in themselves. In Walshe's music they are a starting point. A given. It is her own language – one may easily imagine it is the sound of her own headspace – and so, with these materials, she constructs a new kind of internal logic that is built upon that premise.

The multi-faceted, multi-media, all-consuming busy-ness of a great Jennifer Walshe performance can truly overwhelm us. In this way, it might very well be taken as a metaphor for our modern life, especially with its heavy reliance on pop culture references, particularly including different singing styles and accents, and of course with its ability to find humour in the chaos. You may try to stay on top of everything that's going on, but inevitably, it becomes all too much. So you let go, and you immerse yourself in it.

In the second installment of this article, we will turn our attention to the works featured in the Inappropriate Moments festival, analysing Walshe's musical structures and looking at examples of the harmonic language and other compositional techniques discussed in the article so far.

Dr Peter Moran is a composer and performer, and the founder and editor of the AIC New Music Journal.

Find out more about Jennifer Walshe's music from her website www.milker.org, or on her Soundcloud page www.soundcloud.com/jennifer-walshe.