Four areas of experimentation stand out from the flurry of activity that has taken place in Irish orchestral composition over the past couple of years. These are extended techniques, post-minimalism, live electronics, and symphonic argument. Illustrative of these categories are four memorable compositions from the last decade or so. Phosphors (…of ether) (2012) by Ann Cleare explores extended techniques for orchestra with unusual precision; Donnacha Dennehy’s Hive (2005) is a model of method and movement; Synapse (2003) by Michael Alcorn is fundamental in its genre of live electronics; and Kevin O’Connell’s Symphony (2010) is a rare work of involved formal argument.

While the divisions represented by these disparate works are not exhaustive of the range and breadth of recent Irish compositions for orchestra, they do serve as signposts to the listener. For example, Karen Power’s recent work no chaos: only organised panic for orchestra and live electronics is indebted to Michael Alcorn’s Synapse. Power also invests heavily in extended techniques, many of which can be found in Ann Cleare’s lexicon too. While Power travels far and wide in order to collect environmental sound samples to bring to our attention in the concert hall, the Dublin Laptop Orchestra found inspiration at home, literally. Their ambitious project was to utilise game consoles as instruments and give them pride of place amidst the 19th-century orchestra. Shift by Rhona Clarke is concerned with electro-acoustic processes (though not with live electronics) and extended techniques.

Sean Clancy wrote Ten Minutes of Music on the Subject of IKEA. Before I received the score, the title seemed facetious, but it’s actually apt and peculiarly sincere. This work, in its stark monotony, bears its minimalist influences proudly, and the almost digital precision of execution that it craves is derived from a close acquaintance with technology. Linda Buckley, RTÉ Lyric FM’s second composer-in-residence, is one of the few Irish composers of the past few years to have had the opportunity to explore text, as Dennehy did in Hive, through the medium of choir and large orchestra. She set This Word Love by Raymond Carver for the RTĒ Philharmonic Choir and the RTĒ National Symphony Orchestra.

It’s worth briefly exploring Phosphors (…of ether), Hive, Synapse and Symphony to cast some light on the variety of approaches taken by Irish composers recently.

Ann Cleare may be preoccupied with extended techniques more than any other Irish composer. Phosphors is an example of the considerable lengths she will go to to notate a uniquely envisioned soundscape. Cleare made two versions of the score: they both represent the same material, but each is laid out differently.

Example 1.1: bars 1-5 of score in instrumental grouping layout (below, click to enlarge): 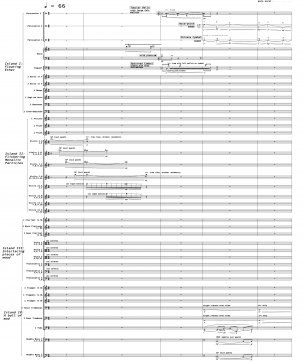 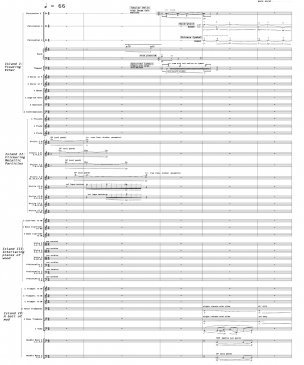 The second score presents the instruments in a standard order, but the first groups the instruments according to the work’s ideational framework, whereby the orchestra is imagined as “four islands”. The islands sometimes relate, but “islands II, III, and IV are composed in a way that they do not know that each other exist”. In Phosphors (…of ether), Cleare conceptualises sound effects, and manipulates their duration, in a unique and imaginative abstract. The complexity of the abstract presents a considerable challenge for the listening ear to realise.

Donnacha Dennehy’s Hive is a piece whose foremost concerns are texture and duration. There is a reverberative grind to the momentum of this music. It creates a hazy space in which effects — sometimes shiny, sometimes dull — wax and wane. Illustrative of this is the combination of circling sandpaper, cast-iron pot lids and amorphous vowel sounds which we hear at the opening of the piece (example 2.1: bars 1-8, below, click to enlarge): 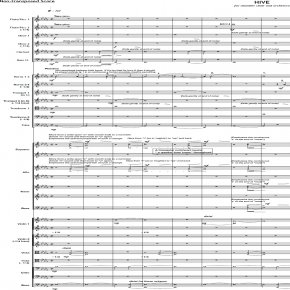 Such details stand forth persuasively because part of the orchestra is detuned by a quarter tone. When well executed, a hue of overtones is produced.

The choir move through a succession of idiomatic utterances. These four bars show just one kind of challenge facing them — notice the leaping 6ths and 7ths shared by sopranos and tenors, and just how disjunct the word setting is (example 2.2: bars 146-149, below): 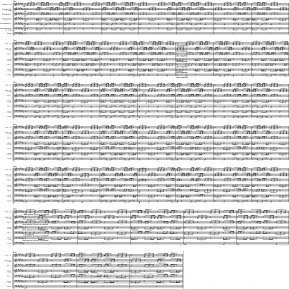 These patterns recur and shift, without respite, for a total of 47 bars. After 35 of these bars, the choir join the brass, in unison. They then repeat seven-crotchet-long patterns, with some altered figurations, 24 times. Such minimalistic undulations characterise the whole piece.

Electro-orchestral scores are not unusual these days. I think Synapse by Michael Alcorn, has, since its conception, exerted an outstanding influence on other Irish examples of the genre. It is a piece to which contemporary works may be compared and contrasted. In this piece, the experience of listening bears the weight of the concept. Alcorn explains: “The term synapse refers to the tiny gap between neurons in the nervous system. Across this gap, signals (chemical neurotransmitters) are transmitted between neighbouring neurons in the form of ‘stop’ or ‘go’ messages [...] The concept of ‘musical synapse’ is represented in this piece by the apparent gap between sounds that emanate from the real instruments of the orchestra and the electronic sound world that is triggered.” (Example 3.1: bars 1-20, below, click to enlarge) 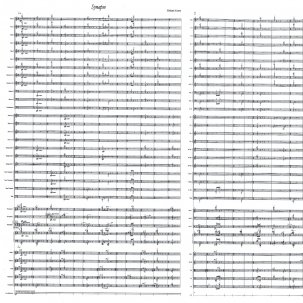 In practice, the spaces between the synchronised orchestral blows of the opening section are shrouded by the peculiar interposition of the first live electronic patch, which the score doesn’t describe. In performing Synapse, the musician experiences a kind of anti-dialogue. The electronic component reacts to her sound just made, but she must not react to this reaction. Every bowstroke disconcerts because of this discontinuity. And so the “tiny gap between neurons in the nervous system” is, for the performer, penetratingly revealed.

What makes music symphonic, as Leonard Bernstein attested, is development. Kevin O’Connell’s Symphony is bookended by a very simple theme of a minor third, which constitutes the genus of the piece. 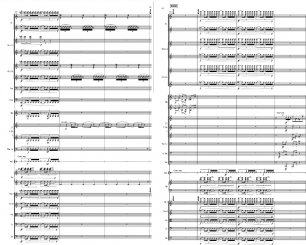 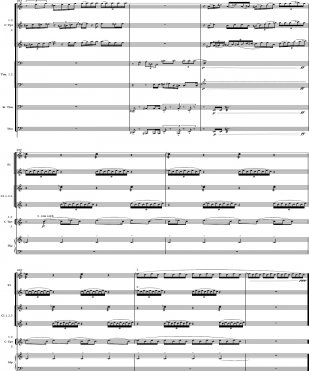 O’Connell develops his material extensively, and with a taste for orchestral colour typified by these combinations of instruments. 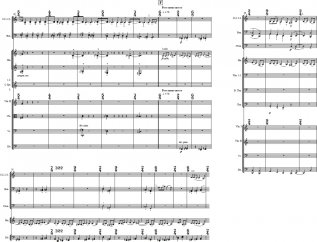 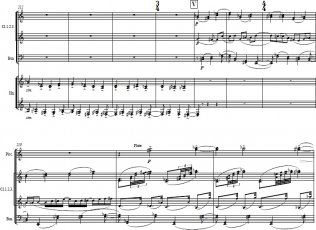 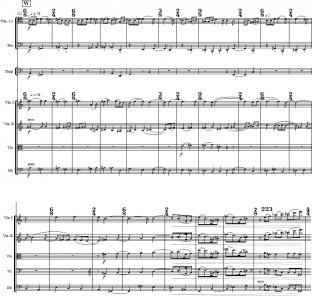 The symphony includes two prominent solos for flute and tuba, both of which seek the soloist’s interpretative freedom. The third movement could be marked giocoso (though it isn’t), and it subtly honours, as this passage hints, at least one recognisable great symphonist of the past (example 4.6: bars 415-422, below, click to enlarge): 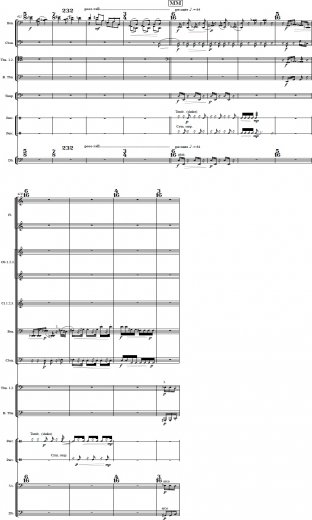 The writing in the concluding movement declares a technically controlled frenzy, though it, like the rest of the work, is characterised by an economy of means. This quality of condensed argument, quite apart from the piece’s dramatic qualities, make it properly symphonic.

Phosphors (…of ether), Hive, Synapse and Symphony represent four categories of compositional approach which are of relevance to many Irish composers in their recent work. But lots of creativity, of course, lies outside the purview of the arbitrary groupings of extended techniques, post-minimalism, live electronics and symphonic argument. The concerto remains a thrilling vehicle for the Irish composer, as is evidenced by recent forays into the form. Both Brian Irvine’s concerto for Darragh Morgan, À mon seul désir, and Bill Whelan’s Linen and Lace, for Sir James Galway, were received with great enthusiasm at their premieres. These concerti have little in common but their success, which may in some part be attributed to the formative roles played by their respective dedicatees. There’s an obvious historical precedent for this.

This reflection on recent orchestral music from Ireland commits, inevitably, grave acts of omission. That said, experience has taught me that idioms can be induced through which the curious listener may confidently approach what, on the surface, are highly disparate creative acts. No composer writes in a vacuum, and there are not that many dialects — I’ve suggested just four here — which we may learn to approach the latest music. It’s heartening that so many opportunities have materialised for Irish composers to write for orchestra. Recent creativity in this area is reflective of a broader panoply of music-making, which is fundamentally confident (and occasionally naïve). As someone devoted to the orchestra as a means of expression, I hope that our composers, and their works, will continue to flourish.

Gavin Maloney is a conductor with the RTÉ National Symphony Orchestra. He has also worked with the Ulster Orchestra, RTÉ Concert Orchestra, Crash Ensemble and National Chamber Choir among others. In 2008 he was the inaugural beneficiary of the Bryden Thomson Trust. His work has included collaborations with Chloe Hanslip, Hugh Tinney, John O'Conor, Orla Boylan, Darragh Morgan and Crash Ensemble. He has recorded the music of Donnacha Dennehy (NMC label), Deirdre Gribbin and Kevin O'Connell (RTÉ Lyric FM label) and his concerts have been broadcast by BBC Radio 3, the European Broadcasting Union, RTÉ Lyric FM, and stations in North America and Australia