In our Irish Composers on Irish Music series, FERGUS JOHNSTON writes about one of his early piano works, a miniature study describing a spiral form through complex tempo relationships.

Piano Study No. 1, one minute and eleven seconds long, was written for Raymond Deane on the occasion of his fortieth birthday in 1993. The form of the piece is derived from an icosahedron, a polygon made up of twenty equally-sized equilateral triangles, of which a maximum of ten can be seen at any one time. If we project an icosahedron onto a flat plane we see the following image, one of three possible symmetries (See Figure 1). 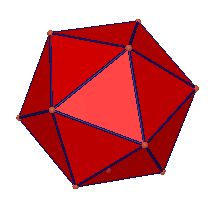 The piece traces an imaginary journey across this projection, using the angle of apparent slope away from the observer of any given plane in the original 3D polygon as the means of defining tempo. It can quickly be understood that the outer six panels in the diagram are the most inclined away from the observer in the 3D model, and occur in pairs, while the single central panel is perpendicular to the line of vision. The three intermediate panels are inclined slightly way from an observer, but not so inclined as the outer six. Thus we have three principal tempi: MM120, MM72, and MM46 (See Figure 2). 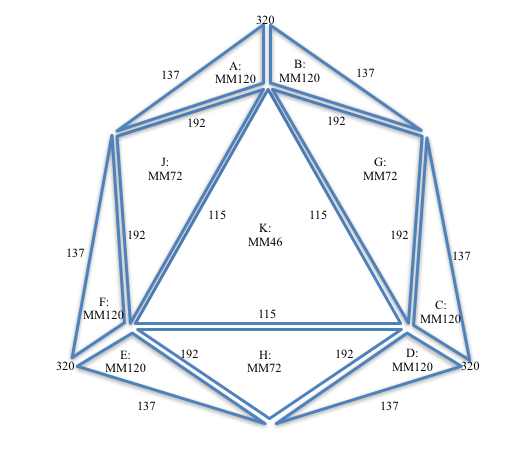 The travel across this 2D projection starts at the outer panel pairs (a & b), at MM120, and moves across these two MM120 panels before encountering an MM72 panel (g), which must be crossed before the next MM120 pair (c & d) are reached. This continues in circular motion (through h, e, & f ) until the last MM72 panel (j) has been gained, at which point the direction of travel moves towards the centre of the projection, to the MM46 panel (k). Thus the entire journey resembles a spiral.

This main tempo structure is aurally defined by the running semiquaver line in one hand, initially the right, but moving downwards in pitch following a "drunk walk" path into the left hand, then back up into the right hand. This is meant to be heard as a background layer (See Example 1).

The foreground content comes from what is going on alongside this structure, and can be summed up as sets of five dyads which are representative of the boundaries of the planes being crossed. Thus, in crossing the first temporal section at MM120 in which the two panels (a &b) are traversed, the boundaries are five in number, hence five sets of five dyads are presented at three different speeds (MM192, MM137, and MM320). There are three different speeds because there are three different apparent lengths of boundary in the 2D projection; the slower speed is the outer boundary, the faster speed is the shared boundary of the two panels, the middle speed the remaining inner side. Thus, in the case of panels a and b, the speeds at which the five sets of five dyads are heard in the first five bars are MM192, 137, 320, 137, and 192, against a backdrop of movement at MM480 (See Figure 2).

Crossing into the first MM72 panel (g), in bars 6-7, there are three instances of the five dyad sets, since the boundaries are three in number. These instances are heard at two tempi, one of which, MM192, we have already met as the boundary between (a) and (j), and (b) and (g). This tempo occurs twice, at the start of bar 6 and the end of bar 7, with the two occurrences separated by the occurrence of an MM115 dyad set.