A Portrait of Jane

Dr Paul Roe discusses his work with composer Dr Jane O’Leary as she celebrates 40 years of dedication to new music in Ireland as director of Concorde and through her many compositions.

‘I would like to think my music invites the listener into a special sound world that stirs the imagination and is full of colour and movement. It’s about shapes, sounds and textures, intermingling and creating their own resonant space.’

1976 was an auspicious year for contemporary music in Ireland. Jane O’Leary, who had arrived in Ireland in 1972, fresh from PhD composition studies with Milton Babbitt at Princeton University, created the contemporary music ensemble, Concorde. Wind the clock forward to 2017 and we find both Jane O’Leary and Concorde thriving. Jane formed Concorde to allow Irish audiences the opportunity to hear new music live in concert. Since then Concorde has travelled worldwide promoting new music from Ireland and across the globe. Jane has always been an artist who composes, performs, curates, advocates and most of all collaborates. Her selfless advocacy and promotion of new music in Ireland for over forty years has seen her at the centre of new developments and fresh initiatives, constantly searching and renewing her own passion for imaginative music making.

I have had the privilege of being a member of Concorde for over twenty-five years. At the invitation of Jane, I was invited to play a couple of concerts with the group in early ‘90s. Soon after I became a member of the group and have had the pleasure of getting to know Jane, working closely with her over many years. In researching this article I was pleasantly surprised to discover that I have played almost 20 works by Jane, some of which I have played many times. She has written several solo works for me, including Within/ Without (solo clarinet), a piacere (solo bass clarinet), Murmurs & Echoes (clarinet & piano)and Clara (clarinet/bass clarinet & narrator). With each of these pieces Jane and I worked closely together. To say I know Jane’s music would be a bit of an understatement. As someone who has worked closely with her during the process of composing, rehearsing and performing this music, I shared with her the joy of not-knowing, of uncertainty and surprise in the extraordinary process of creative music-making. After a recent performance of a piacere for solo bass clarinet, I remarked to Jane that I had no idea of what was going to emerge when I stood to perform the piece that day. Not because I had any concerns about the performance itself, but simply because I realised that each performance of this music is sui generis. Jane, of course, understood precisely what I had meant and agreed that the arts of composition and performance are enmeshed – being an amanuensis for music itself. Her music defies categorisation, it is indeed a world of colour, movement, shapes, sounds and textures. All of which are evanescent, ephemeral and fluid.

‘Written music is like nothing in the world—an index of time. The idea is so bizarre, it’s almost miraculous: fixed instructions on how to recreate the simultaneous. How to be a flow, both motion and instant, both stream and cross section.’ (Powers, 2003)

There is something in the titles of her music that gives us more than just a glimpse of what Jane O’Leary is about as a musician, as a person. The titles are both biographical reference points and metaphorical allusions. There are clear personal artistic responses to important and indeed at times devastating moments in her life, most notably in A Way Through (2013)and the echo of all that’s happened (2014); the titles transparently evoking the deep emotional turmoil on the tragic death of her daughter Caitriona in 2012. Moments of reflection and repose have also been a theme of her work with works such as: Reflections for Piano (1985/86), Reflections II for chamber ensemble (2002)and Winter Reflections (2010). Titles such as Into the Wordless (1998), Something There (2006)and In a flurry of whispering (2010)reveal a deep interest in the spaces between things, of liminality and the ineluctable passing of time.

Jane’s art is antithetical to method, her rigorous training at Princeton under Babbit and others in the ‘60s and early ‘70s has been subsumed and indeed sublimated in a deeper excavation of the human psyche. She is a diviner of sound, exploring the fundamental richness of this inexhaustible medium. Her world is evoked, discovered and re-imagined through sound and each new work is a blank canvass upon which she plays, cajoles, provokes and intuits worlds of colour and great spaciousness. By nature Jane is meticulous and her crafting of musical shapes is a process that reflects her interest in fine details. Her sketching of ideas takes place typically on large sheets of manuscript with a script that ebbs and flows with musical gestures teased out in a range of directions. She once told me that a good day’s work composing was evidenced by a litter basket full of crumpled manuscript. Each subsequent day begins again with a fresh page building on an internal architecture derived from previous days’ (decades’) experiments. This is a process of weaving, of harvesting material from a deep source within. There is both ruthlessness and bravery in waiting in ambiguous space between these generative processes and the emergent music. This is a patient waiting game where trust is necessary with rigorous attention paid to balancing intuition and intellect. Easy technical facility is eschewed in favour of a deeper dive into consciousness. The two solo works she wrote for me, Within/Without (2000)for solo clarinet and a piacere (2005) for solo bass clarinet, present a lens that exemplifies her artistry.

Written and first performed in 2000 as part of an exhibition entitled Containers, Within/Without for solo clarinet is a musical distillation of a rich and varied artistic engagement that typifies Jane’s work. The piece is a musical portrait reflective of an artistic practice that is resourced, renewed and influenced through ongoing personal connection with people. This composition is, like most of her work, autobiographical. A reference point in a life lived amongst people and not sequestered in conceptual abstraction. The people at the centre of this work were the curators of the exhibition – Hilary Morley and Sean McCrum, ceramic designer Brian McGee and myself as collaborative performer. The premise of the exhibition and thus Jane’s composition was for craftspeople and designers to create objects around the theme of containers. Five composers were invited to work with these individual practitioners to create a new musical work connected to the physical object, most of which were performed by me. The process involved various significant conversations and ongoing dialogue over a period of many months amongst these people and in particular with Brian and myself. Brian created a beautiful amphora with various miniature amphorae inside and around the main object and Jane’s response to this work was immersive and personal. It provided for her a direct visual stimulus that clearly shaped the work…

‘I’m very interested in visual images and how they might connect with music…I can’t explain most of the time how the visual might influence my music [however] In this piece I can because it’s very clear that the pitch gives a shape and the type of motifs…it’s obvious what’s happening [it] had a predetermined shape.’ (Jane O’Leary in Manjón-Cabezas Guzmán, 2016, p.34)

During the composing process itself Jane and I worked closely together in an enriching creative experience. Both the composition and my subsequent performances explore the space between phenomena: visual, linguistic, emotion and sound. The resulting music is a living conduit for time itself enfolding what has been and unfolding what is emergent; the interstice between past, present and future contained within the moment of sounding.

In a paper I co-wrote with Jane entitled ‘The Creative Performer/The Listening Composer – Searching Together’, Jane expresses eloquently how her practice has evolved to embrace the richness of being a collaborative artist:

‘When I began writing music in the early ‘70s, composers and performers were very separate entities. The process of making music was clearly defined: the composer gave exact instructions, the performer followed these instructions.  The result was rewarding for neither side.  The idea of a ‘perfect’ performance (i.e. one that meets the composer’s instructions exactly) is false, as is the idea that a piece is ‘finished’ when the composer puts it down in notation.  Experience has led me to believe that a piece only begins life with its first performance and that it is very much the result of combined input from both composer (who must be searching and listening) and performer (who must be creative, involved and adventurous).’  (O’Leary & Roe, 2009) 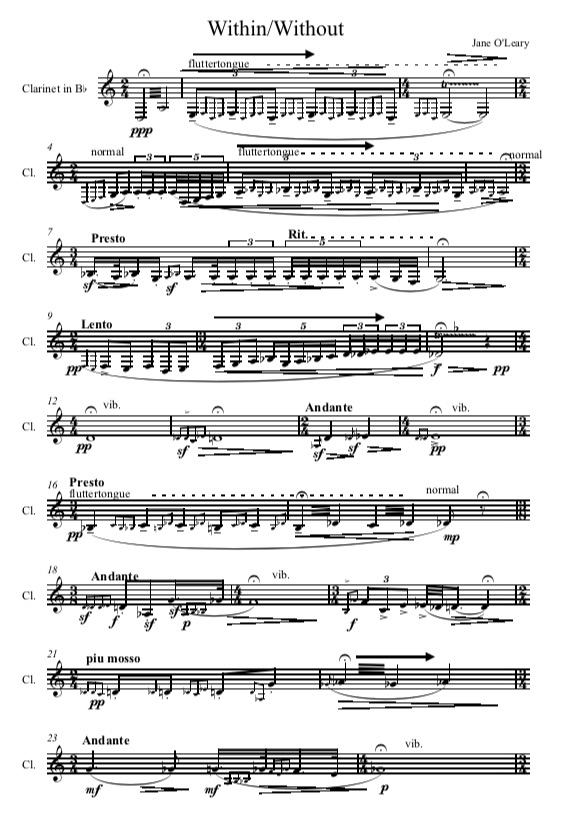 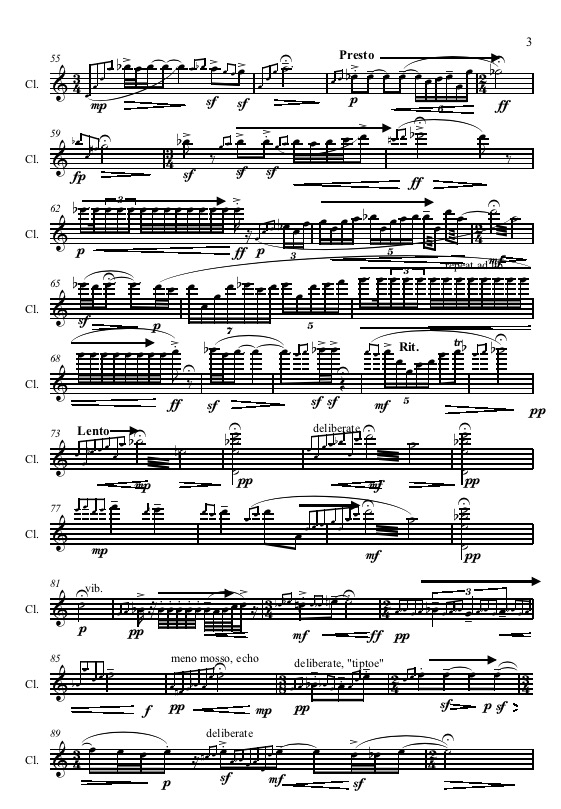 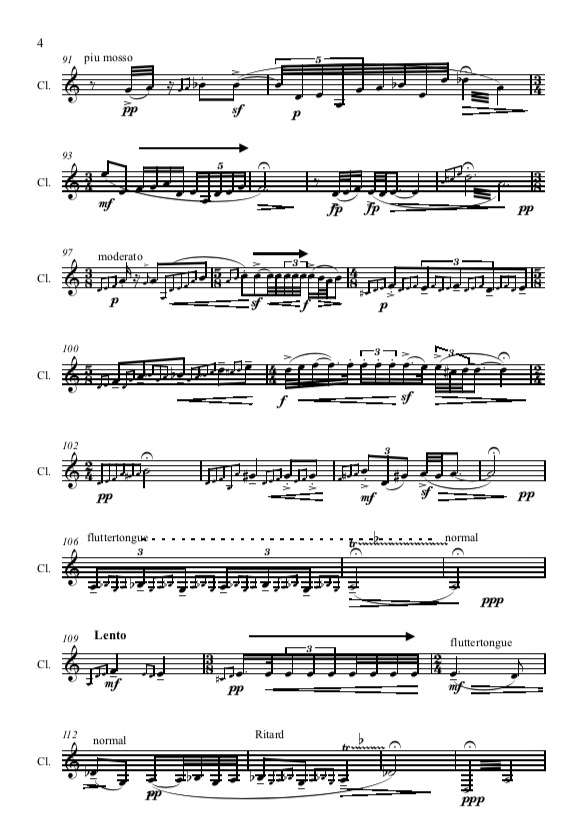 ‘As you please’ – the English translation of the title of this solo bass clarinet piece is really an invocation or an invitation from Jane for the performer to engage in a creative dance. The piece is deliberately ambiguous in nature and like most of her music will not yield to cursory virtuosity. There is mystery here; the realisation that music is elusive, ephemeral and ultimately unknowable is at the core of her aesthetic:

‘As a piece is absorbed by the performer, it continues to develop and as it moves into the minds of listeners it takes on another life.  This is truly the beauty of music—that it remains alive through performance.  There is no final or perfect version.  It is not ‘owned’ by anyone but is there to be received by those who are open to it.’(O’Leary & Roe, 2009)

In playing this piece and indeed her other works there is value in challenging and re-evaluating assumptions about creative practice. Binary perspectives of composer and performer are challenged where true understanding resides in the space between. The exploration is both the question and the answer (for composer and performer) where any attempts to shackle music by facile individualism creates sterility. The work is intuitive and drawn from a deeply reflective space that encourages and rewards a continuation of a musical dialogue through the medium of performance. From a performance perspective this dialogue is most effectively enacted through presence. A presence that listens, responds and embodies the mystery of the music. An overly analytic or prescriptive approach leads to creative stasis and results in a disembodied dullness.

Listen, listen again – there is always more to hear

The true art of the musician is the ability to listen, a listening that goes to the heart of our humanity. A deep listening that reflectively and intimately weaves together the skeins of life. Throughout her life, Jane has sought to explore sound and the coalescing and intermingling of this beautifully sensuous vehicle with other forms of art including literature, poetry and visual arts. Like many great artists her work has become more subtle, allusive and layered. The gestural qualities have been a constant but with the passage of time the gestures have become more metaphysical and are profoundly expressive. Her work is an ecological excavation of the soul, continually moving towards untethered spaces. Recently she described listening as ‘not being dissimilar to being at a birth’and, whilst this was in relation to being present as a composer at a first performance, the metaphor seems increasingly valid for her work as a composer. A listening that is attentive and present to the stirrings of the spirit. A ruminative interiority that in expression is beautifully complex.

The evenings are long

And, just before dark, places are set at the Table of Listening

as the search starts

I look forward to witnessing how the extant works deepen as they find their way into the hearts and minds of future generations of listeners and I am both curious and intrigued to the beautifully imagined future she is conjuring.