Elizabeth Hilliard's Sea to the West and Aylish Kerrigan and Dearbhla Collins' I Am Wind on Sea both have seascapes as covers, and take their titles from pieces concerned to a greater or lesser degree with the power of the ocean. All of the works here are being recorded for the first time, and both CDs serve their composers well, essentially focusing on vocal music with electronics and piano respectively, with some exceptions. The CDs reflect the diversity and strength of Irish composition, as well as including two works from different parts of the output of the London-based Christopher Fox. Further to this, both CDs are released on the same Métier label.

I Am Wind on Sea: contemporary vocal music from Ireland 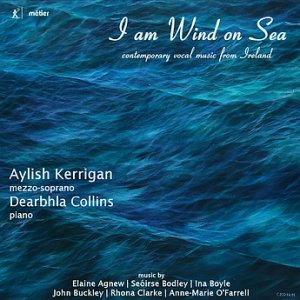 The CD takes its title from the best piece on the CD, which also gets the best performance. John Buckley’s volcanically inventive vocal fantasia, which places considerable demands on the vocalist (in addition to requiring her to contribute significantly as a percussionist on crotales and woodblocks), was written with the particular vocal and dramatic qualities of Aylish Kerrigan in mind. It is a pivotal work in Buckley’s output, coming as it does on the heels of such hard-edged early works as Oileain for piano (superbly recorded by Anthony Byrne on Marco Polo/Naxos), which pushes into the realm of combative modernism, and the later works, from around the time of the first (and so far only) symphony (also available on Marco Polo/Naxos) onwards, with its inventively rich textures and abundant lyrical and energetic impulses. The piece uses the contrasting colours of Dr. Kerrigan’s voice to suggest several different personas (or spirits) throughout, as each line of the text (translated by the composer) is either spoken, dissembled or dramatically propelled into the open spaces this piece seems to inhabit. Extended techniques, such as tongue clicking, flutter tonguing and the like, are used tellingly to evoke an immediate sense of ritual (to which the percussion contribute notably – one can almost smell the incense) which is at one and the same time ancient and abrasively contemporary. The work, and its performance on this CD, represents a tour de force in contemporary Irish vocal music.

There are three works included by Seoirse Bodley, and they present a broad canvas representing aspects of the composer's stylistic orbit over a long creative career. The Tightrope Walker Presents a Rose dates from 1976 and showcases the combination of modern features with traditional Irish material typical of much of Bodley's output from that decade. It is given a vivid performance here by Dearbhla Collins. After Great Pain, written in 2000, sets poems by Emily Dickenson and Walt Whitman, the latter providing the focal point of the cycle. The musical language here combines the more familiar sounding (the tonal), with an unusual use of that material. The tonal piano part of the first song, for example. Is countered by different harmonic regions implied in the vocal line. The recitative-like style of the third setting is followed by the driving energy of the final Dickinson song, before a sudden, succinct conclusion. The overall effect is quite moving, and the cycle, given its subject material, is devoid of any indulgence: every gesture has its point. Remember (2011) sets a text by Christina Rosetti and is stylistically consistent with the earlier cycle, with the added referential nod to Henry Purcell (five statements of the “remember me” idea from Dido's lament in Dido and Aeneas) marking the piece as a moving memorial for Bernadette Greevy.

Anne-Marie O’Farrell’s Hoopoe Song is the most extended piece on the CD and it is an effective fusion of bell sonorities and birdsong in its invocation to prayer and reconciliation. There is a starkness to much of the music in this piece, culminating in an evocation of the eponymous bird, which flies over borders and walls in Jerusalem. The bells of the ending provide a suitably impersonal, powerful gesture, not devoid of hope.  It is difficult for music to avoid being either overly illustrative or mawkish in relation to subject matter such as this: the directness of utterance here overcomes this and the resultant piece is quite moving. It is beautifully performed and characterised by Kerrigan and Collins.

Ina Boyle is the only non-living composer featured on the CD, but she is, in some ways, as 'new' a figure (if not as contemporary) as the other composers featured. Her Three Songs of Walter De La Mare, written in 1956, are characterful miniatures in essence. Her ability to capture a mood with short gestures is clearly in evidence here, as is her operatic leaning – the first two songs are like succinct scenas: the third, by contrast, is more haunting and sustained. Also included is her beautiful Sleep Song (1923), the ending of which leaves the voice in mid-air as the piano resolves the harmonic tension. It is very much of its time, and deserves to be as well-known as any of the more famous songs by English composers of the period. In other words, it fears nothing by comparison with the much more frequently performed and critically regarded work of any of Boyle's more famous contemporaries. It is significant to have this neglected figure and her music included on this CD.

Elaine Agnew's April Awake is predominantly epigrammatic, with two very short songs framing the more extended (but still brief) central one. It is perhaps a symptom of this succinctness that none of the songs has any post-text piano music: once the text is set, the piece is effectively over. The ideas in the central setting of The Hill-Farm do receive a little more space to explore and develop, but overall the feeling is that less is not always necessarily more: the songs don't step outside the poems, and as a result neither does the music, despite some effective writing. Rhona Clarke's smiling like that... is the odd-one-out on the CD for a number of reasons. Firstly it replaces the piano of the other items on the CD with tape, and then there is the matter of the piece itself. It incorporates a boombox beat which transports the music from a contemporary to a popular idiom, which means that the piece sits very oddly with the rest of the CD from a stylistic point of view. There is a dramatic vividness about parts of it which one could imagine giving a theatrical edge to a live performance, but overall the transposing of Molly Bloom (the text comes from the last portion of Ulysses) to a hip-hop environment is either provocative or peculiar (or both, perhaps). While a polystylistic setting can reflect a certain irony, humour or objectification with regard to the intensely personal text, placing the hip-hop allusion front and centre deprives the piece of a wider context and any possible subtext. It is strongly characterised, but more odd than convincing.

Sea to the West 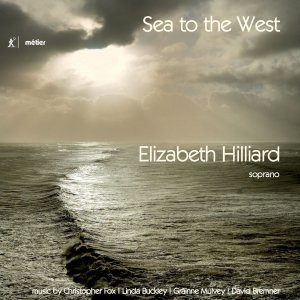 This CD features two works by Christopher Fox in addition to the three Irish composers represented, a composer who has many connections with Ireland. The eponymous piece is evocative, hypnotic and moves from a monotone to multi-layered textures that are very resonant, before ending with an opening out to other sound worlds beyond the piece which breaks the spell of the preceding music effectively, as well as being neatly subversive as an anti-ending. The words of the title recur as a sort of refrain several times through the piece, enhancing the atmosphere which is at times dreamlike, at other times more surreal. The work is shrouded in memory, and evokes the layering, recurrence and selectivity of our memories beautifully. Fox very successfully creates an organic growth from the single line to the many, or from the horizontal to the vertical: the unity between the two (both being derived from the same material) forging a unique sound world for the piece. The considerable demands on the soloist are superbly realised in this recording. His early work Magnification is also featured on the CD and presents another distinctively imagined soundscape, using more indeterminate methods. The atmosphere is consistently sustained, with the interaction between voice and recorded humming providing internal flux. A heightened sense of exaltation is vividly conjured, with the singer trying to capture this heightened state but only partly through language: the text and its meaning meet somewhere in the middle, with resonance once again playing a pivotal part, as the live singer creates their own resonating chamber.

Linda Buckley's Numarimur presents another distinctively imagined sonic landscape which is beautifully sustained, with some internal variation within a lyrical, hypnotic ambience. The piece is more circular than linear, almost as if it is being viewed (heard) from different angles. This is a dreamlike piece with soft edges, in which the medieval and contemporary electronica mix, personal to the composer, evokes a timelessness that is also contemporary. Although based on a long narrative Icelandic poem, the piece does not have a narrative thrust – the ending is more a stopping point than a conclusion, leaving the feeling that the piece continues beyond our hearing.

There are also two pieces by Grainne Mulvey recorded here. Eternity is Now presents a pared down version of Mulvey's usual multi-textured soundworld, the single line being coloured vividly. There is a restraint here which does not eschew Mulvey's customary demand for virtuosity. The sensitively controlled line is clothed in a wide vocal palette. The explosive nature of her work is veiled here, but none the less personal for that. Phonology Garden is vivid, sometimes ecstatic, sometimes nightmarish, and is a striking example of the kaleidoscopic incorporation of the natural within the supernatural. Mulvey describes the voice as being “like a garden”, and her exploration of the possibilities of the voice in both the solo and taped part creates an impression of something primeval and elemental, yet still vividly communicative for that. The human raw material is used to create an impression of something novel and surreal, conjuring the elemental with great sophistication and verve.

The David Bremner piece is the longest on the CD by some distance, based on a 25-word text (described by the composer as “a pool of 25 words”), being set (if that is the correct term) in three-word phrases. The pitch material mirrors this to some extent, with a gradually unfolding content which sometimes turns back on itself and sometimes inches its way forward. Bremner divides the work into sections which suggest a dramatic sequence of events, but I don't think these sections are perceptible to the listener: there is rather a merging of the logical and irrational on a large scale, magically sustained and often hypnotically involving. Berio's SequenzaIII may be a model to some extent, but the extended techniques of that piece are not present here; this is effectively a long, continuously sung line from beginning to end.  There is an urge to communicate here, which is sometimes tentative and teasing, and at other times hurried and frantic, but always compelling. This is due in no small part to the terrific performance by Elizabeth Hilliard, which is wonderfully controlled in terms of vocal colour and dramatic urgency (even at reduced dynamic levels). The work is part dramatic scena, and part dreamlike evocation: it is a triumph for both composer and performer.

Martin O'Leary is a committee member of the Association of Irish Composers and teaches composition in NUI Maynooth.

I Am Wind on Sea and Sea to the West are both available now on the Métier Label from Divine Art Records.