TIM DIOVANNI shares his experience of The Secret Music Trail, one of the New Music Dublin: 2018 Defrosted events

At the end of a long wooden pole, blue strips of cloth that look like what you would find at the end of a mop flap in the cold blustery wind. Benedict Schlepper-Connolly, our tour guide—hereafter The Shepherd—stands on the steps of the National Concert Hall (NCH), pole in hand. On his right, a young man with a thick, scraggly brown beard smokes a cigarette. A sudden onrush of about 10 people joins the group. Now we’re about 30 in total, including the camera crew, The Shepherd, and The Shepherd’s colleagues, who stay at the back of the pack. Most of us are wearing parkas or woolly sweaters. It’s 11:30am, which is just late enough for the party to appear awake and sentient. The Shepherd addresses us, raises his staff, and motions for us to begin.

Last March, New Music Dublin was supposed to hold 26 events across 10 stages, focusing on new music by Irish composers. A free concert on the steps of the NCH—at which the Crash Ensemble was set to play a new composition by Gráinne Mulvey—was scheduled to open the festival and a mass rendition of Louis Andriessen’s Workers Union was scheduled to close it.

The recently-appointed director of New Music Dublin, John Harris, proclaimed: “If you have a curious mind and open ears, you’ll find many new, stimulating and intriguing things to feed your brain, heart and soul. This is where the new is happening."

But then, spoiling the festival’s plans, Storm Emma, a blizzard from the south, combining with a cold blast from the east, blanketed Dublin with heavy snowfall on 2 March. The festival cancelled its events the day before, in anticipation of the storm.

In July, New Music Dublin announced a rescheduled, condensed program for 21-23 September. I attended the Secret Music Trail on 23 September, which was curated and produced by Ergodos, a record label and production company ostensibly run by The Shepherd and Garrett Sholdice, also a composer.

We slip behind the NCH and through a stone doorway to the Iveagh Gardens. We stop in front of a still, silent man with a gong suwukan—a Javanese instrument—hanging over his chest. The Shepherd welcomes us and explains the basics of the tour. We’re visiting hidden spaces, where we will see performances. He then says that someone needs to whack the gong to signal the start of the trail. Someone eagerly volunteers and does the job.

After this bit, we head off into the heart of the park. There, there is a woman, who The Shepherd later tells us is Olesya Zdorovetska, dressed in all black, with black hair to boot, standing in the middle of a white sheet strewn on the ground in a circle held down by stones. She starts incanting in what I figure is Ukrainian and picks up the stones—a few at a time—to hand to us. Most members receive at least one stone. I’m in the back and don’t get one.

We walk toward a park fountain. Swirling electronic noises are now playing. We’ve attracted the attention of many Sunday strollers. Zdorovetska tosses a stone into the fountain, and the electronics become louder and grittier. The Shepherd then gestures to us to throw our stones into the water, and everyone holding a stone or stones does. The electronics, though, sound totally unaffected by our tosses; it all feels humorously anticlimactic. When the music stops, The Shepherd explains that we have just experienced The Water Project, designed by Zdorovetska, Nick Roth, and Keith Lindsay.

The Shepherd is now leading us to the next event. Only he and his colleagues know where we are going. We amble by the Times Hostel on Camden Place. Above, flags fly in the crisp September afternoon air. A left on Synge Street, a right on St. Kevin’s Cottages. Then, we enter The Copper House Gallery. Passing 100 Faces, an exhibition by Pradeep Mahadeshwar, we stop in a hallway. On the landing above, the Silver Kites, a female vocal trio comprised of Fionnuala Conway, Lenka Dobai, and Judith Ring, stand in a triangle. We look up at them, and they begin to sing. The singers swoop, glide, and slide between pitches. Passing dissonances sparkle with pain and brief grief. Their diction is impressively pellucid; their timbre loamy. For this performance, Ring wrote four songs that are greatly pleasurable and skillfully composed.

After some parting comments from Ring, The Shepherd grabs his staff and leads on. Soon we’re entering the Ergodos studio, a factory-like building on Portobello Harbour. Past the foyer, a melodica, cymbals, and a clarinet are set up in an intimate performance space. The Shepherd pops in front of us—he’s somehow able to instantly materialize at will—and introduces the next performer, Seán Mac Erlaine. He, in turn, bounds out from the curtain on my left and slips past me. Mac Erlaine begins his improvisation right when he sits in his chair. Wielding chopsticks, he rattles cymbals and taps on the frames that they are attached to. He processes and loops the sounds that he is creating with software tools. Then, he’s on the melodica, playing hazily dissonant tone clusters. Mac Erlaine really dazzles, though, after he switches to the clarinet. On that instrument he performs wandering legato lines with ample vibrato. Soft microtonal flutterings tinge his sonic atmosphere with smoke. 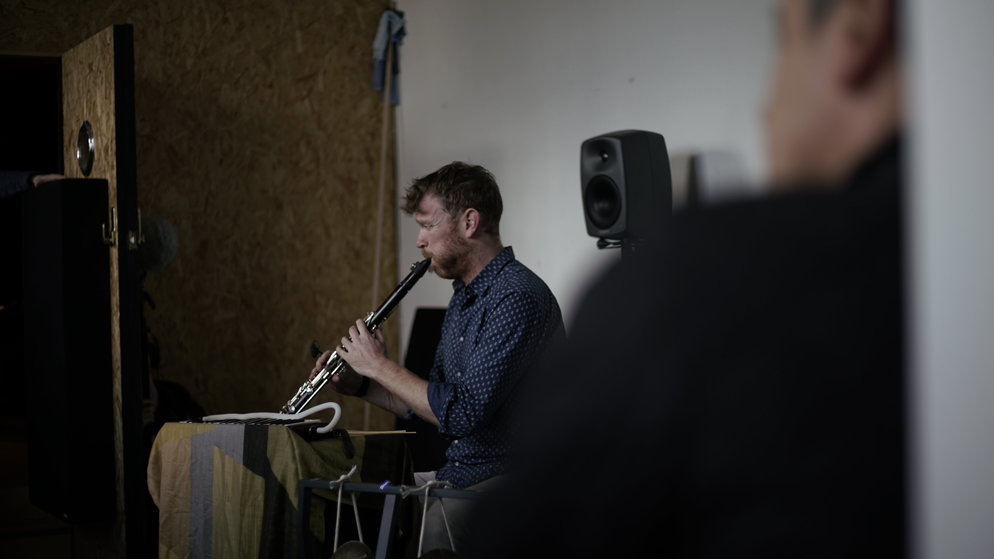 After Mac Erlaine finished his improvisation, we’re off again, following The Shepherd’s lead. Under trees whose leaves will soon leave them, we stroll along the side of the Grand Canal. A voice and guitar drift over to us. Two people inside a canoe jump into view. The vocalist, Aoife McAtamney, is paddling upstream while singing hysterically about death. 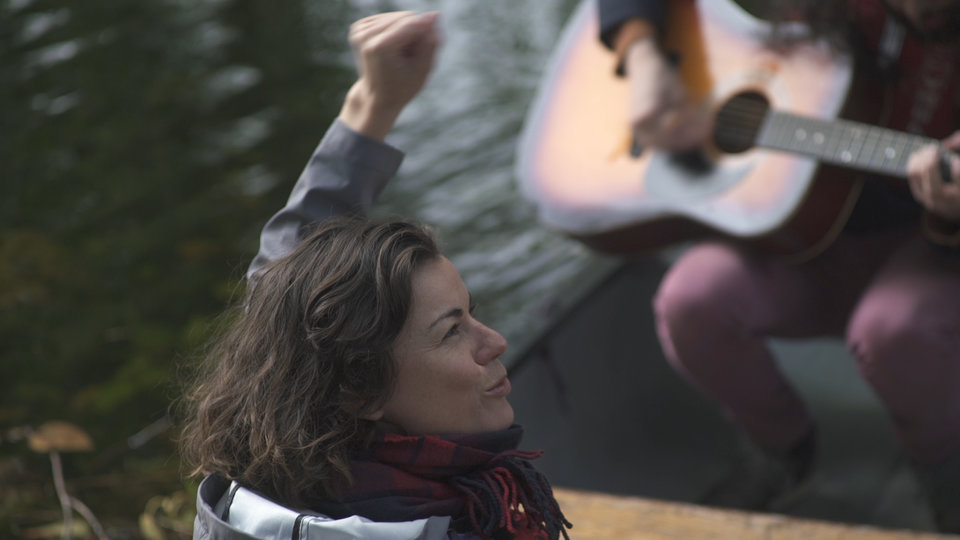 When they perform their second song, a construction worker in a CAT vehicle slowly rolls by behind us. His machine beeps loudly and insistently. For some time, the CAT overtakes command of some group members’ attentions. Since the Secret Music Trail incorporates elements of chance in modern public life, like this CAT, it is pointedly different from concerts in venues like the NCH.

Two cyclists drinking in front of a bar, who—based on their garb—participated in today’s Great Dublin Bike Ride, toast our good health as we walk by. The Shepherd stops in front of St. Finian’s, a small Lutheran church, and we enter. Singing and electronic waves greet us. 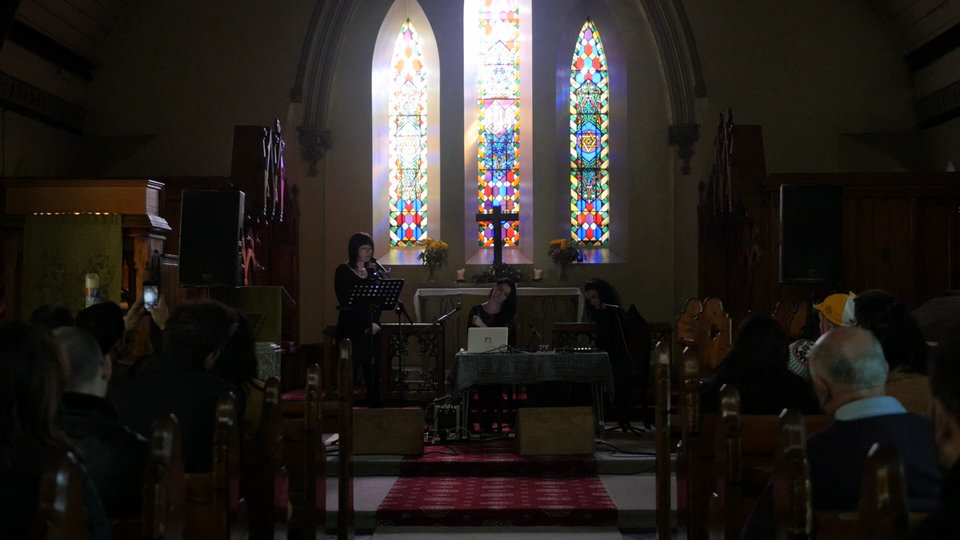 Fiona Kelleher chants melismatic phrases from Symphonia Armonie Celestium Revelationum, by Hildegard von Bingen, the famed medieval composer and abbess. Kelleher’s soaring devotional incantation emanates dramatic mysticism. Irene and Linda Buckley, on flute, electronics, and occasionally vocals, transport Kelleher’s lines into an ethereal, glistening soundscape. While they’re performing, The Shepherd glides to the front of the pews, staff in hand, and motions for the first row to stand and leave. The rest of us follows suit. It’s as if we eavesdropped on a Midday Prayer, entering and leaving while it was ongoing.

Winding our way through more alleys and streets, we end up by the southeast corner of the NCH. We veer right and into the foyer of what looks like an auxiliary building. The Shepherd explains that we actually are about to enter one of the few extant real tennis courts. When The Shepherd opens the door to the enclosed court, electronic shots—like those you hear in laser tag—beam toward us. Four cannons, apparently made of cardboard or some type of synthetic material, are attached to rotating devices in the middle of the court. Four performers, in all black, control the cannons. Jonathan Nangle, the composer, stands behind the installation, staring at his Mac. Some performers begin to spin their cannons. Their movement creates a Doppler effect: the electric whooshes crescendo as the open end of the cannon spins toward you and rapidly decrescendo when it spins away. Some performers manipulate the cannons by covering and uncovering their openings with a circular piece of the same material that they are made of. Because the performers’ movements relative to the listeners’ positions determine the sounds we hear, each listener perceives the work much differently at the same time. 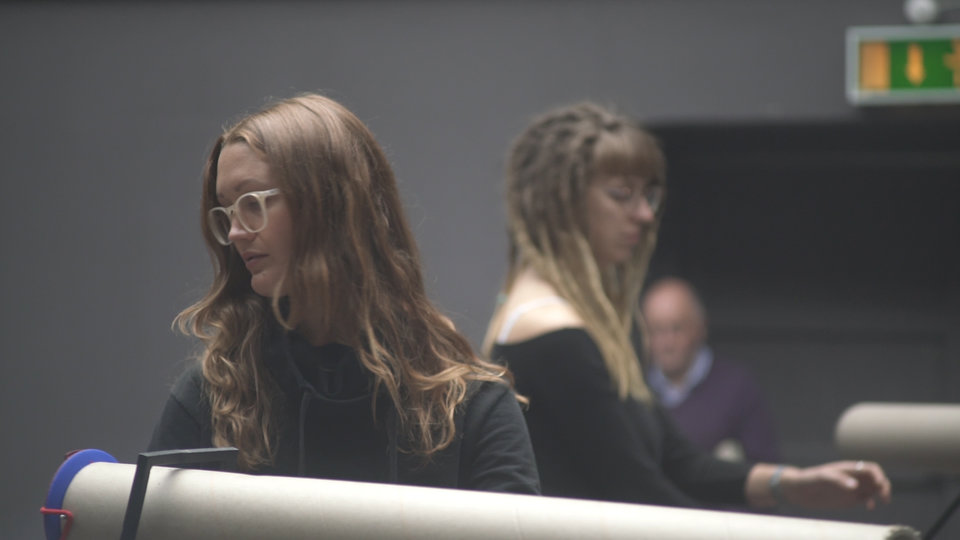 The major issue with this installation is the conduct of the performers. They appear detached, nonchalant, and disinterested, as if they don’t really want to be doing this or don’t really know how they got here. One performer apparently accidentally unplugs her device, seems to notice the problem, but keeps on spinning her cannon, unworried and unencumbered. I get that they’re supposed to be embodying a sort of postmodern edginess, however, focused playing creates substantially better impressions than ambivalent sauntering. If Nangle calls for this behavior in his score—which is highly unlikely—it doesn’t fit the character of the installation.

Presenting musical works throughout the city, the trail challenges assumptions about concerts and changes how audiences experience music. Moving from one venue to the next gives us time to process what we just heard and keeps us physically active. But this curation suffers from an implicit loss. Standard concert and recital halls force listeners to concentrate on the music being performed. We silence our phones, and the venues reduce outside distractions. These spaces, therefore, provide us an opportunity to get away from it all—to purposefully set aside our daily cosmopolitan chaos to listen to, digest, discuss, and maybe even be moved by art. Few other places in the modern world offer such conditions. In contrast, The Water Project and the performance in the Grand Canal competed with ambient public happenings for our attention. The trail, then, eliminated one of the essential benefits of traditional halls: focused, deliberate listening. New Music Dublin director John Harris’s cutting-edge rhetoric in March rings true. This is where the new’s happening. Yet novelty does not always indicate progress. This time, I demur.